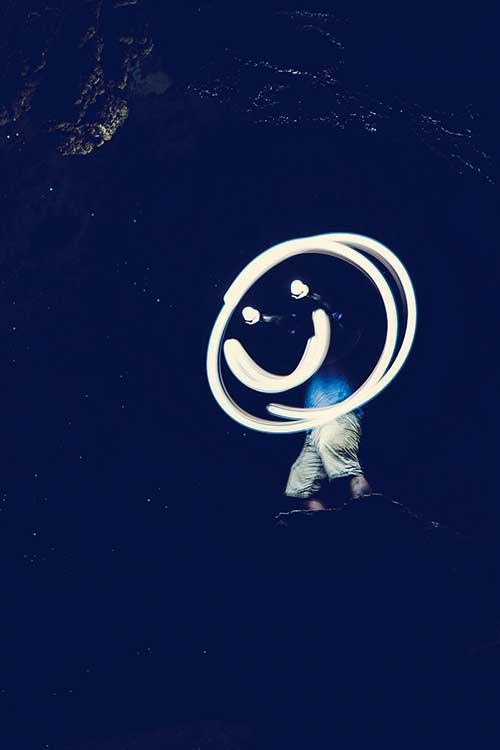 What happens to karma after spiritual enlightenment?

After enlightenment, my karma unwound with breathtaking speed. I also noticed that I catalyzed the karma of those close to me.

Finished. Done. Nothing Left. These were the overriding feelings after the jaw dropping novelty of the first few weeks settled in.

Even the idea of happiness, which we all aspire to, was no longer available to me.

It wasn’t a decision, it was an inescapable observation. This world held nothing for me. And it never did, I just didn’t know it until now. Because prior to now, I believed I was a “me”. When you have a “me” at the dead center of your experience, of your consciousness, then the way you perceive the world is organized around that “me”. That mistaken self has a lot of skin in the game, lots to accomplish and do and become and gain (or lose).

We want to achieve certain things, build a certain kind of life, improve ourselves, become enlightened or spiritual…and we believe that it will make us happy, that there is a happy life, if only we can find or create it. The thing is, I was happy. I had created a nice life and I was quite content in it. After waking up from the dream of self, even this happiness, the desire to build on that happiness and defend that happiness disappeared.

There is no way to explain the feeling of completion, that there is absolutely nothing in this world for me to do or achieve or experience. It’s like walking into a giant emporium of newborn infant clothing, a vast complex that would take you decades to traverse…only you have suddenly realized that you live in a world with no more infants.

The idea of karma is really confusing to people. Perhaps it is even more mixed up for people who were not raised in a culture and religion/philosophy where karma is a native concept. I’m not going to try to unravel this beast here. I only ask you not to get too wrapped up in any definition of karma and roll with it for now. We don’t have to make any decisions about what it is or isn’t at this moment, so I’m going to use the term loosely today.

Even though I was finished, had seen through the elaborate traps of happiness, progress and the like, when I looked around me, I saw all that I had built.

Monuments to self. Fortresses of happiness. Treasuries of accomplishments. While the self, the happiness and the accomplishments were ephemeral, the structures built for and around them were anything but. They were solid, dense and very complex. A marriage, a business, friendships, properties, a social life, with all kinds of agreements and agendas and promises and founding myths…based on beliefs that were no longer true. It’s as if the person inhabiting my life vanished in the space of a second, but the life was still there, expectant, demanding.

Then, the epic collapse. All that I had built around and for the self-that-was-no-more started unwinding, unraveling at the seams. Here, today, I’m going to call all these structures karma. Suddenly I was no longer adding onto or building up these structures, and more importantly, I was not doing daily maintenance on them. There is so much effort we put into keeping the show going. We don’t want to see the cracks, the creeping mold, the actual motivations that make up the foundations of the cherished edifices of our lives. We diligently maintain them so that others won’t see the flaws, but even more importantly, so that we don’t have to look at them directly.

The karma would have burned through itself anyway.

As it does for everyone, not just for enlightened people. Karma smolders and burns and you’ll see people go through long and short cycles of this. Some call them Saturn returns or transits. Some call them midlife crises, or seven year cycles. Even when the structures remain, there is some point where the damage (or change) is too much and it has to be let go or rebuilt in a different way. For me, it was as though an accelerant had been added to this process, and the results were spectacular. Nothing like seeing your whole life become one enormous bonfire.

All the surfaces cracked. And since I wasn’t smoothing them over anymore, those cracks got uglier and deeper. People around me became so transparent. All the niceties were gone. It’s as though everyone in my life decided all at once to scream, “This is what I’m really like, underneath the good manners and charming exterior. Just beneath the surface, this is what I am!”

And not just people close to me, but everyone. Neighbors, employees, you name it.

In the space of about two years, what took my lifetime to build was gone.

What would have taken the rest of my life to unravel was consumed and transmuted by this insatiable fire. At the very end, I realized my husband was only alive because he was siphoning off my lifeforce, and I energetically closed that line of support. Twelve days later he, an otherwise healthy man in his 40s, dropped dead of a brain aneurysm.

I noticed the people closest to me also had their karma accelerated. Life situations flared dramatically and quickly to climax proportions that couldn’t be ignored or pasted over. There seemed no more room for business as usual, no matter how much that was preferred. What would have taken years to come to a head presented as immediate crises, things were revealed that could not be unknown, could not be shoved back into the locked box.

I have no idea how or why this occurred in the lives closest to me. Did the fire spill over somehow?

It wasn’t physical proximity, because one of my closest friends lived on the other side of the country.

Was this a bad thing? Many people describe their life just prior to awakening as bleak or terrible or even suicidal. Mine was anything but. I was happy, that rare state that people even envied me for. Just prior to waking up, I was having the best dream ever. I know it seems so stark when I say it like this, describe all that was apparently stripped away. But if it were even possible to dream again, and to have that sweet and happy dream, no less, I would choose this uncompromising lucidity, this clarity that allows no comfort, no faith, no artifice and no hope.

Post Enlightenment Survival Guide Get over your {no} self! Let’s face it, apprehending that you are not a Self and that the Self you always…

The persona, or what is popularly called the Ego, is limiting, to be sure. But damned if it doesn’t have its uses! After spiritual enlightenment,…

This is part of a conversation I’ve been having with a reader. He’s been going through a lot, and his symptoms are ones many of…

After awakening, you may feel you don’t belong here. People are fumbling around, sleepwalking. Avarice and manipulation are hardwired into our institutions. Perhaps you only get…

There were things happened along the way, though for me this never felt like a gradual process. I was asleep one moment and awake another.…

You are once again reaching for that golden ring of enlightenment to remedy your self made drama—which is just a clever way of getting out of doing the work to get control over yourself and stop creating these dramas.

You want to stop being at the mercy of your programs, but you don't want to do the work to deprogram yourself. Enlightenment is your distraction, delusion.

If you wanted to deprogram yourself, you could start right now, and do it every day, like a full time job, like your life depended on it, like it was the cure to some terminal cancer that was eating you alive.

But there is resistance to that. That resistance is really common, almost to be expected. The program is made to protect itself. It will do whatever it can to keep you from seriously doing what it takes to deprogram, and instead will send you off chasing enlightenment.

This is a sensitive subject. Because sometimes I'm talking to you, and sometimes the programming is so dominant that I'm really talking to it.

Fundamentals Are you at the mercy of your thoughts, emotions and programming? The Peerless Series is a beginners course that covers the basics of cultivating…

Q&A Got a problem that no one else can relate to? If it feels like your problem or question or life situation is rare, one…

Mastery Series Are you serious about mastering your mind?  I’ll give you the tools, perspectives and techniques to stop being a passenger and get in…

Private Consultation There are times when getting insight, strategy and support from someone you trust makes all the difference between going around in circles or…